Christopher McKaigue settles into the Swans

Here is an interview conducted with Ex Slaughtneil and Derry player Christopher McKaigue.  It was conducted in March 2010. 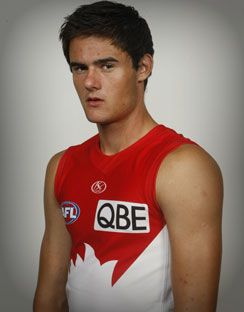 How long have you been over in Sydney now?Been in Sydney just over four months and the warm weather is starting to annoy me, love a nice cold day to train in! In saying that hard to beat a good tan.
So how are you settling in?Settled in pretty well haven't had much time to think about home we always have some kind of training whether it be skills weights or running lots and lots of running. So after a day of training I'm usually ready for bed around 9pm, as we start around 7.30 must mornings to avoid the midday heat.

Have you done any touring around Australia since you have been over?Haven't done much touring to be honest been to Melbourne a few times to catch up with the Irish contingent down there but that's about it.
How often do you train and what range of training do you cover?
We train 6 days a week one of them days being game day, we cover everything weights, stability, pelvic stability, skills video analysis and recovery. So there's a lot to do plus I have a session most days with coaches to learn more about game.

Is the training much tougher than it is at home? Have you had any big hits?
We do train hard over here and for a long time too. Usually pre season at times was toying with the fine line of being a bit too much. The running element is the hardest we have four tough running sessions a week in pre season lots of 3km and 7km time trials where you've got a target, but the hardest part being only one day rest between hard sessions, really hard to get fresh, probably due to the fact we would have leg weights and upper body on our so called rest days!
What is the toughest aspect of the Aussie Rules game?The toughest part of Aussie rules for me was not the shape of the ball surprisingly but the length of the game hard to keep going and attacking for sometimes 2 and a half hours.
Tadhg Kennelly is back with the swans. This would be a good help to you.Tadhg has been really good for me helped me a lot especially after Christmas when I got a bit homesick. He has been playing for a long time and knows what it takes. So I have been spending a lot time around his place going to the beach and kicking the ball around.
What is the structure of the playing season over there?
The season basically goes for 22 weeks straight with one break the top 8 playing finals top 4 getting 2 chances bottom 4 only the one. So it's pretty demanding on the body.
How are the young players integrated into the game? Do you train/play separately?The whole squad train together, with all us younger guys having extra sessions and development coaches to get us ready for senior footy, but is a competitive place to be and in training games no one holds back for anyone, they all want a crack at the senior team.
Have you been able to keep in tough/watch any GAA over there?Been watching a fair bit Gaelic back home on Setanta over here, but not that much because it makes me feel a bit more homesick so I try and just watch as much AFL as I can and get my head out of back home.
By MalMcMullan at 1.8.11

Email ThisBlogThis!Share to TwitterShare to FacebookShare to Pinterest
Labels: Aussie Rules, In The Spotlight