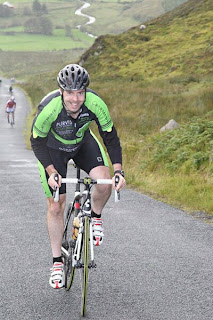 Any time he is talking to me, Cathal Doyle calls it Malmore gap.  It is the gap in the mountains between Buncrana and Clonmany.  The real name is Mamore Gap an integral part of the Foyle Cycling Club’s Inishowen 100.
Two years ago I was in the Carn Wheelers group who headed to the top of the island, to tackle the rugged terrain.  I failed to get up over , so Cathal has christened it Malmore.  On Sunday I revisited Inishowen with ten other from the Carn crew, this time I was the winner.  The score now, Mamore Gap 1 Mal 1.
Looking back on it, Benbradagh near Dungiven is much harder, is not that bad.  However, on my previous visit I was carrying a few unwanted pounds and didn’t have enough miles in the legs.  It was like hell on earth.
On Sunday past we all got it up it no blem, but with a few punctures and a crash, we were delayed.  I wasn’t a race and we finished well behind everyone else, but the group stuck together.  The reward of a warm feed, certificate and t-shirt was more than suffice.  Satisfaction that you have accomplished a goal is more than any prize.
The weather was a real mixed bag.  At Malin Head it was like a summer’s day, blue skies and breathtaking scenery.  At Greencastle it was wet and miserable, but thankfully that was in the last part of it.  Getting wet at that stage doesn’t really matter that much.
On the descent of , we had a nasty crash involving Gareth Skelly and Trevor Averill.  Narrow roads, a greasy surface and steep hills are not a good combination.  Thankfully there was no barb wire like in the well documented Tour de France crash.  An ambulance was nearby and the lads got treated, with no serious injuries, but Trevor’s shoulder was very sore and his cycling was finished for the day.
For rest of the descent towards Clonmany, it was hearts in the mouth stuff.  All I could remember was the bang, Trevor’s water bottle and glasses going down the road beside me in addition to the noise of Gareth’s tyre blowing out. 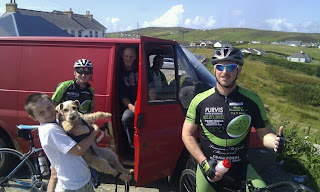 Another saving grace came in the form of Danny O’Kane (The Man in the Van).  Betty Anne’s husband took all our bikes from Maghera in the van, which then doubled up as our support van for clothes, spares, food and of course Trevor an his bike.  Thanks Danny, Donal and of course Jessie the dog.
The next big challenge is the long, testing climb from Kinnego bay towards Greencastle.  With almost 80 miles in the legs, most of which are rolling hills it has to be taken with care.  Once again all the Carn Wheelers made it to the top.  Pacing yourself the key tactic.  The view of Greencastle and Magilligan from top was worth waiting for and the descent was a great reward.
The last 20 mile was reasonably flat, but with the head wind coming from Lough Foyle we still had a considerable amount of work before we got to .  With the legs still reasonably fresh and the terrain suiting me, I opted to the take on the role of domestique and sit at the front and do the work.  With the miles ticking towards 100, I was thinking of the soup, the shower and the t-shirt. 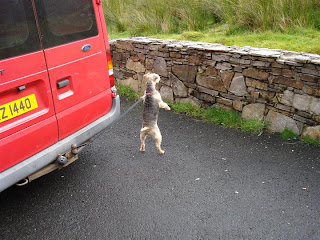 Coming into Muff I made a made sprint for the village, before dropping back into the pack for the last few miles to .  A welcome face was Pauline who was there to welcome me back, she was aware conquering Inishowen was a big thing for me.
Carn Wheelers i100 Squad 2011: Trevor Averill, Eamon Convery, Paul Duffy, , Alan Lamont, Chris McGinnis, Michael McMullan, Paul McNamee, Barney Mulholland, Betty Anne O'Kane and Gareth Skelly.


A huge thanks to Danny O'Kane who took over the bikes in what doubled up as our support van. Also Donal and Jessie the dog! Thanks Danny, it was a great help to us. Also thanks to the Ambulance Staff who treated Gareth and Trevor on Mamore Gap.


Also in our thoughts all day, was my Slaughtneil clubmate Martin Mulholland, who has passed away over the weekend while refereeing a hurling game.  Martin’s son Darren is a member of Carn Wheelers.  It is a terrible tragedy for Martin’s wife Eileen, sons Darren, Jarlath, Conor, Stephen, his friends and the local community. 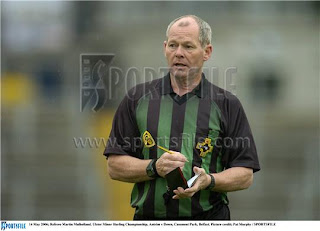 Not just in his capacity as referee, when I think of Martin I think of his massive kick-out when he was Slaughtneil senior goalkeeper.  He coached football, hurling and camogie all levels. He kept himself very fit and was one of the fittest men in the local area.  He will be a huge loss.
By MalMcMullan at 16.8.11