In the last year Carn Wheelers has grown with regard to it's participation in mountain biking.  It has give the club a wider range of interest and bringins a bigger membership.
One of the mountain bike crew is Stephen Law, a man is pushing for the most active member of Carn Wheelers.  Some weeks he has two or three events on and still is out on the group club cycles as well.
He highlights some of the bits and pieces of his mountain biking for us. (There are some YouTube Links below as well) 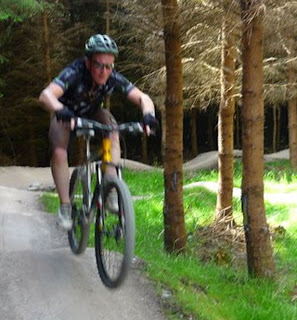 Favourite Music:I'll listen to almost anything

How many years cycling: 4

How did you get into cycling? I always had an old mountain bike for messing round the forest in Portglenone but a friend suggested we go to places like Tollymore and Cavehill. I soon found that I enjoyed it and that my bike wasn't up to the job. I bought a second hand full suss and that was that.

Which do you prefer MTB or Road racing? Its hard to say, if you had asked me at the start of the year it would definitely have been MTB, but I have really enjoyed some of the races i've taken part in this year on the road. Its hard to beat the thrill of the MTB though, no matter how tough the race theres still guaranteed to be one piece of trail which if you push really hard will give you the best buzz!

Any races won? Still a bridesmaid. For now!

What is the best race/MTB  course you have been to? Its hard to say, either Kilruddery in Wicklow or the Bull Raid course in Bellurgan Park Dundalk.

Favourite cycling Food:  Has to be Rice Krispy squares

Best thing about cycling: On the MTB it has to be hitting your favourite bit of trail as hard as you can. On the road its the sense of achievement, wether that be racking up the miles or finishing a big climb.


Tip for beginners: Go out to enjoy every ride, wether its a race or a training run. Remember thats why you do it in the first place!

Email ThisBlogThis!Share to TwitterShare to FacebookShare to Pinterest
Labels: Cycling, In The Spotlight