Derry has always prided itself on having a very competitive club championship.  With Derry’s interest in the All-Ireland over, it’s back to club action this weekend for senior and intermediate clubs. 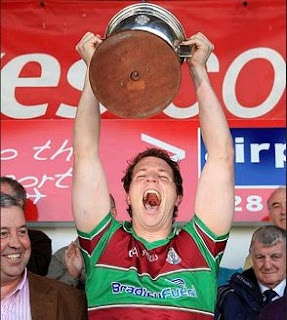 For half the clubs, they are aiming for the second win to take them to the quarter finals.  The rest who have already lost once, are trying to keep their hopes of a trip to Cetlic Park in October alive.
SENIOR GROUP 1 (winners into the quarter finals)
Greenlough v Dungiven
Greenlough under Gary Coleman have adapted to senior ranks well, but Dungiven will be the first team into the quarter finals.
Bellaghy v Coleraine
A tight one to call, Fergal Doherty faces a race against time to be available.  Coleraine should edge this one.
Ballinderry v Kilrea
By all accounts Ballinderry are going pretty well, Kilrea have suffered a recent dip in form after a great start to the season.  Ballinderry should take get through this tie.
Slaughtneil v Ballinascreen
The ‘Screen are favourites for the championship and should edge out Slaughtneil. Might take a replay.
SENIOR GROUP 2 (losers are out)
Castledawson v Loup
Loup have had a rise in form in recent times and should keep their championship hopes alive.
Magherafelt v Newbridge
Both teams have had good wins recently, however Magherafelt’s more potent attack will be the differnce and will see them win this one.

Glen v Glenullin
Glenullin have lost lot of key players due to injuries.  Glenullin;s greater championship experience should see them win this one.

Lavey v BanagherLavey are a bit like Galway hurlers, hard to predict.  On their day they are a match for anyone.  Also Banagher have imved a lot under Paul Diamond.  Hard to call this one, maybe Lavey to edge it.
INTERMEDIATE GROUP 1 (winners into the quarter finals)
Craigbane v Foreglen
Tie of the round between two teams with high hpoes in the championship.  Foreglen by 2 points.
Moneymore v Swatragh
Moneymore are top of the league despite very limited resources.  Swatragh will get it tough, but should win this one.

Steelstown v Lissan
Steelstown are capable of beating anyone on their day and should see off Lissan.

Ballymaguigan v Slaughtmanus
Another tough one to call. Slaughtmanus put it up to a lot of teams last season in the senior ranks and have a stronger panel available to them this year and should win this one.
INTERMEDIATE GROUP 2 (losers are out)
Limavady v Desertmartin
Desertmartin to win this one and get themselves back in the reckoning for the championship.
Faughanvale v Claudy
The Vale will be favourites for this one against a Claudy team who have struggled without key players.

Ballerin v Ogra Colmcille
Ogra have now established themselves as a regular intermediate club.  Ballerin should however win this one.

Drumsurn v Séan Dolan’s
Dolan’s have struggled since coming up from Junior ranks and Drumsurn are favourites to win this one.
By MalMcMullan at 1.8.11