On a morning when I only have about 30mins to get a workout, I will often turn to the turbo trainer - aka Gravy Train due to the amount which it makes me sweat!.  It's much better to get outside, but with all the clothing, gear, water bottles and bike check, it would take your near 30mins before you get on the bike.  At times I feel like a woman getting ready for a ball there is that much gear to get on.
After taking Friday as a rest day, I needed a work out to keep me ticking over til next week.  So I decided for a short intense session on the turbo.  My training bike which I have hooked up to the turbo is a TREK 1000 Discovery Channel, 8 speed compact chain setup, so easily pushed in the big gear
After a 3minute warmup spin and Sky s News on the telly I began a fairly intense workout.  In the biggest gear, and highest resistance on the turbo I set out for a 25min TT.  I had a target of maintaining a 100rpm cadence, to compensate for the compact chainset on the bike.
During the 25mins I worked up a great sweat and got a good session into the legs.  Sky s News was dominated by and the transfer market.  My beloved Everton never get a mention, poor Moyes doesn't have any money to spend.
After the 25mins, I got off the bike happy to have got in a good workout.  My cadence counter showed an average of 108rpm, so I was happy enough.
of cyclists I talk to hate the turbo trainer.  I agree that it is far from ideal, but if weather is bad or you only have a short training window, it serves its purpose.  However, you anyways need to have a structured routine so you have targets to meet.  This time mine was to maintain a high cadence for 25mins, about the length of a 10 mile TT. 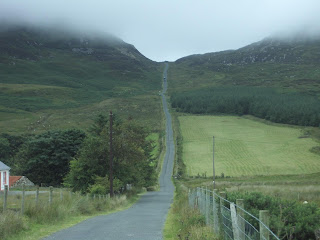 Mamore Gap - Part of Inishowen 100
﻿
Just over 2 weeks to go until the Inishowen 100, so another tough week of cycling ahead next week.  Is the Tour De France 2012 still a realistic target ;-)

Got bad news this morning, Brigid Heavron died this morning.  We coached her son Danny when I was involved with the Derry Minors. We were beaten in the All-Ireland Final, but I remember chatting to Brigid in the Hotel after the game and she was so proud of what Danny had acheived during that season. RIP Brigid
By MalMcMullan at 30.7.11