I remember watching an All-Ireland Hurling Semi-Final in 1992, it was Down v Cork.  Gerard McGrattan scored a goal for Down, but as the RTE cameras were showing the replay, they missed Cork’s instant response.  A move started with a quick Ger Cunningham puck-out and seconds later Noel Keith was picking the ball out of the Down net.

Hurling is the world’s fastest field game in the world.  Not only do the ‘keepers have a tough task, but up in the gantry, the media must find it hard keeping up with play, as the scenario above demonstrates.  However, in the game now there are more cameras and angles, so rarely is something missed.

It may not have been hurling, but when photographer Mary K Burke (County Derry Post) went to Slaughtneil last year to cover a championship tie between Loup and Magherafelt, she was bound to have felt save enough.  After all, she was in God’s country!  Nothing was further from the case.

The game hung in the balance until the end, when Loup pulled away for victory.  However, during proceedings Loup were awarded a line ball.  Mary K was in close proximity trying to get the best possible shot to go along with Cahair O’Kane’s words of wisdom.

The line ball was struck with great power, but it lacked direction and hit Mary K in the head, knocking her to the ground.  Such was the force that she didn’t remember who it was.  Loup went on to win the game, but it was ‘game over’ for Mary K.  She had to be treated for injury.

She is a great follower of Gaelic Games and being from Dungiven she will have more than an interested eye on the football and hurling championships later this month.  This week I made contact with her to see where her interest in sport’s photography started.

Mal: What is your background in sport?

MKB: I played a bit of camogie at school (St. Patrick's Maghera), ladies football for Dungiven for years and soccer for Dungiven Celtic Ladies. I also cycle a lot during the summer. [Is this another candidate for the Cycle Slam Chris?]

Mal: How did you get into sports photography?

MKB: Nobody would come to photograph the ladies matches so when I stopped playing I bought a camera and decided to give it a lash.

Mal: How long have you been at it?

Mal: What kind of camera do you have?

MKB: I have three Nikon cameras but it is really all about the lens and they are more expensive than my car.

Mal: Who is the most famous person you ever photographed?

Mal: What sports do you cover?

MKB: Soccer, Rugby and all GAA games. It's tough getting to everything these days though.

Mal: What is the best game you have ever covered?


MKB: The Lavey v Ballinderry game last year. The St. Pius Magherafelt’s All-Ireland Final was the best college game I've ever seen. The most memorable for me was the North Derry U21 final, Dungiven against Steelstown. I nearly had two kittens in the last five minutes it was so tense and my son was playing!

Mal: What is the most bizarre photo you took?

MKB: I was leaning over a bridge one day photographing a dead cow in water when strange a wee man grabbed me by the ankle and said "I've a hoult a ye daughter". I thought to myself "How did I ever get here"?me you have ever covered?

MKB: The Lavey v Ballinderry game last year. The St. Pius Magherafelt’s All-Ireland Final was the best college game I've ever seen. The most memorable for me was the North Derry U21 final, Dungiven against Steelstown. I nearly had two kittens in the last five minutes it was so tense and my son was playing! 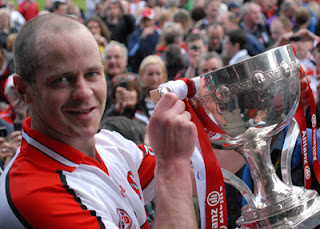 Mal: What is your best photo?


MKB: My photos are not as high a standard as some of the brilliant photographers in the industry. One of my favourite pics is of Kevin McCloy with the NFL trophy with the crowd behind him on the field. He'd just accepted the cup and was heading back to the field, I shouted him from the stand and he turned for the shot - a very accommodating captain.

Mal: What is the toughest part of the job?

MKB: The long hours and sometimes the weather - I did a 76 hour week the first weekend of the championship. Also, I photographed a National League game in Portlaoise in -7 degrees one night - cold toes.

Mal: What is most enjoyable part of it?

MKB: The game, pure and simple. There's nothing more passionate than the GAA at club level - cousins marking cousins and neighbours going head to head - it just can't be replicated anywhere else.

Mal: What do you do in your spare time?

MKB: Spare time is a privilege for me so it's mostly spent watching my three boys playing football or just chilling at home.

Mal: Who will win on Sunday, Kerry or Dublin?

MKB: I think Kerry, their scoring power is just unreal - the cream always comes to the top where Kerry are concerned.

I am sure Mary K will at home this Sunday watching Dublin and Kerry, but then is back into club action.  She will be hoping the semi finals of this year’s championship is a safer environment than last year.


She will be hoping that coaches all through the county will be brushing up on their kicking accuracy to avoid Mary K as she patrols the sidelines. She must me glad she is not in New Zealand, with Sexton and O’Gara kicking for touch.
By MalMcMullan at 15.9.11

Email ThisBlogThis!Share to TwitterShare to FacebookShare to Pinterest
Labels: In The Spotlight, Sports Photography