In The Spotlight - Conleith Gilligan (Ballinderry) 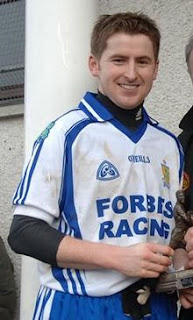 He may be known as ‘Deets’, some Ballinderry folk will call him ‘Dino’ but when Ballinderry won the 1998 All-Ireland Sevens title at Kilmacud Crokes, Conleith Gilligan was quite simply the star of the show as the ‘fly’ goalkeeper.  He had played MacRory and
A few years later after Ballinderry had won the Derry, Ulster and All-Ireland titles Conleith Gilligan was most likely in Forbes [not Forbes club or Forbes Racing] ordering a new sideboard, such was the number of man of the match accolades he was picking up.  With Mickey Conlan now in the established number one, Gilligan was the conductor at number 11.
However, in the last few seasons the Ballinderry attack has taken up a different formation.   Raymond ‘Crook’ Wilkinson and Enda Muldoon have been playing in this role, with Gilligan pushed up as a finisher, alongside Collie Devlin and more recently new underage sensation Ryan Bell in attack.
So basically Gilligan has played many different roles in the game.  From the early days of goalkeeper practice on St Pat’s back pitch, to a penalty scoring goalkeeper with
During the week he will have been in Eugene Kelly’s thoughts as he prepares his Dungiven side.  As he steps off the bus in
Name: Conleith Gilligan
Nickname: Too many to name
Club: Ballinderry Shamrocks
Age: 31
Height  5.10
Weight:12st
Occupation: Sales manager
Boots/Gloves Worn: Nike Tiempo/Breath gloves
Favourite Film: 300
Favourite Song:  Anything by Susan Boyle
Favourite Food: Chinese
Favourite Drink: Tea
Favourite pitch:

Best player played with: Too many to single one out.
Sporting Highlight: AIl Ireland Club title 2002.
Biggest Disappointment: Losing any final
Childhood idol: Trevor Giles
Biggest influence in your career: Brian McIvor
Advice for young players: Work hard and listen harder
Best trainer in the club: Kevin Moss
Worst trainer in the club: Darren Conway
Other Sports played: None
By MalMcMullan at 24.9.11

Email ThisBlogThis!Share to TwitterShare to FacebookShare to Pinterest
Labels: Club GAA, In The Spotlight