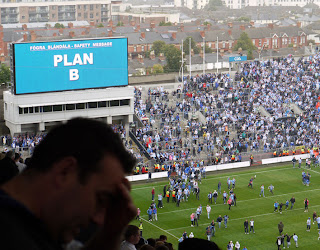 The year was 1995, Ballinderry were playing Errigal Ciaran in an Ulster Club game at Ballinascreen.  It was slipping away from them, with minutes remaining.  I always remember the closing stages of this game.  Ballinascreen stalwart Matt Trolan came over the PA system and uttered the words “all stewards to end of match positions, all stewards to end of match positions”.
For the team trailing, it usually means the end of their season.  Not in this case.  Ballinderry’s Raymond Bell punched two goals, turned the game on its head and it was the end of the season for Errigal.  This was an era when club games in were played in front of huge crowds.
It also brings me back to Lavey v Dungiven encounters of the 1990s.  These games were fiercely contested.  Very often spectators watched what was going on off the ball, more than what was happening during play.  It was the real championship.
Watching the recent Ballinderry v Bellaghy game brought some of those memories back again.  However, so too did Kilrea’s win over Slaughtneil on Saturday night.  It was a significant and dramatic win for Kilrea, but devastation for us.
It made me think of some of the memorable days watching club football in the county.  Here are a few that spring to mind, in no particular order. 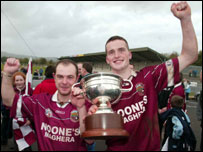 (1) – Slaughtneil v Ballinderry – 2004 semi finalA dramatic win over Ballinderry, with three Kearney points from centre back inspiring Slaughtneil over the Shamrocks.  The final win over Bellaghy is our only ever championship title, but was nowhere near as memorable as this semi final game at Lavey. I remember my cousin ringing me at the final whistle from Oz and roaring down the phone.  It was the other side of the world but that’s the club championship for you.
(2) – Glenullin v Dungiven – 1997 Round 1
Dungiven went on to win the Ulster Club title, but I always remember these games.  Glenullin at this point were not challenging for the title, but they were a tough nut to crack.  This tie went to a replay and Dungiven went on to build on this victory.
(3) – Slaughtneil v Ballinderry – 2000 semi final
Slaughtneil had won the previous two minor titles and played in two Ulster finals.  However, this team was not fancied to go anywhere near as far.  They beat Bellaghy in the final to complete a three in a row, but I always remember this classic encounter with the Shamrocks. It was at Bellaghy with a late, late Patsy Bradley goal grabbing victory.
(4) – Kilrea v Magherafelt – 2011 Round 1 game
We had just beaten Castledawson in the first game of this double header.  I was debating whether to stay for the second game or not.  I was glad I did.  It turned out to be a cracking game with twists and turns.  It will be a game that Kilrea ‘keeper Paul Morgan will always remember for his goalkeeping heroics.
(5) – Slaughtneil v Glenullin – 2008 Quarter Final Relay
I know there are a lot of Slaughtneil games, but then it’s my club after all.  This game was played under lights at and had a Champions League Wednesday feel to it.  Slaughtneil were in real diffs at half time, staring defeat in the face.  A legendry team talk from manager John Rafferty inspired the Emmet’s to victory, but Patsy Bradley’s catch from a kickout in the last play was quite simply awesome.
(6) – Ballinderry v Lavey – 2010 Semi Final
This is a game with a difference.  It was memorable but I actually wasn’t at it.  Instead Killian Conlan kept me up to date by text.  It was minute by minute and this was in the days before Twitter.  It was as if I was at the game in Greenlough on that Sunday evening.  However, some of the people in attendance left early missed the finale as Ballinderry pulled this out of the bag right at the end.
(7) – Ballinderry v Ballinascreen – 1994 Semi Final
Ballinderry had picked up great momentum during this championship campaign, but Ballinascreen went on to spoil Ballinderry’s season in this semi-final at Lavey.  I remember Ballinascreen scoring 0-19 with Eamon Burns scoring heavily.  There were some great scores in this game.
(8) – Bellaghy v Slaughtneil – 1998 Round 1
At this stage Bellaghy were the team to beat.  Slaughtneil were in full control of this game, with Kevin O’Neill (now in ) pointing frees from everywhere.  Was there a shock on the cards?  There certainly was until Danny Quinn came off the bench to score a goal to force replay.  Slaughtneil lost the replay heavily, but the drawn game was a classic championship encounter.
(9) – Dungiven v Lavey – Semi Final 1993
I think this was 1993, but not totally sure.  Lavey and Dungiven were the kingpins of football at this stage.  This game was played at Slaughtneil with the stand packed to the rafters.  It was not a game for the feint hearted, the off the ball antics were x-rated at times.
(10) – Foreglen v Banagher – North Derry U16 Final 2006
Banagher and Foreglen were great rivals at underage up through the ranks, so I made the short journey over to Glenullin for this game.  It was a worthwhile trip, with extra time needed and also floodlights.  It was score for score, with Banagher going on to win.  I remember one of Foreglen’s goals, Nigel Bradley virtually ran the entire pitch before cracking to the net.
These are just a few ones that I remember.  Are there any that you remember? Let us know via the comments section below.  Thanks.
By MalMcMullan at 14.9.11